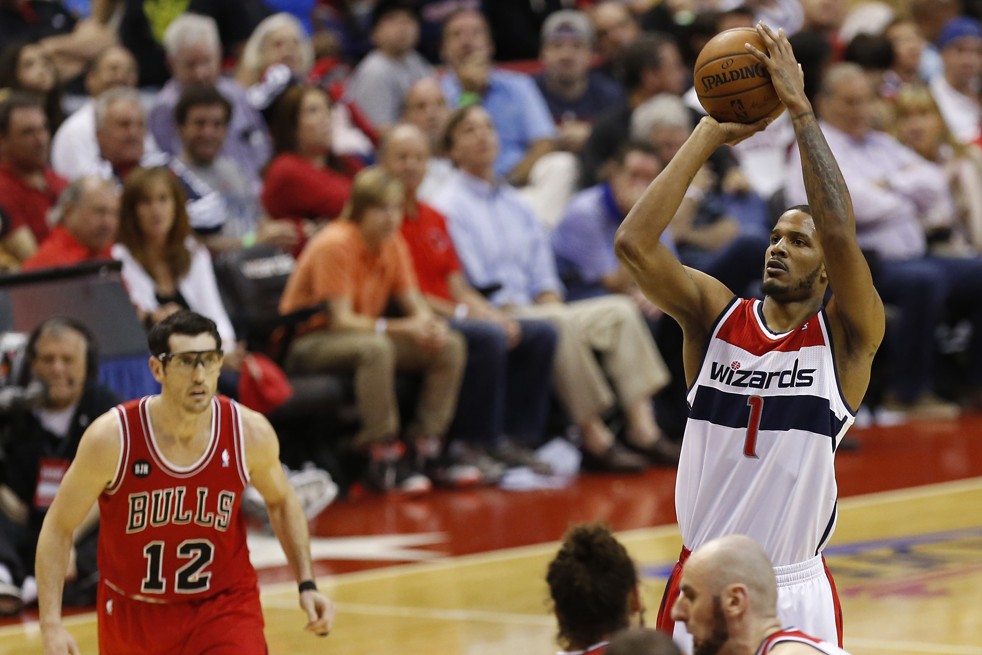 As enjoyable as the Wizards-Bulls series has been so far (for Wizards fans, at least), there’s a tangible feeling that Washington has drawn to an inside straight. (That’s a fancy poker way of saying they’ve gotten lucky.) Yes, I’m aware the Wizards have looked good in the playoffs — teams look good when they win.

I’m also aware that the “experts” at ESPN and TNT (and elsewhere) have declared this Washington as a near-perfect squad with “no weaknesses.” But, much (most?) of the commentary has been a veritable catalog of cognitive biases. Over the course of six months and 82 games, the Wizards were average. A perfectly average team playing against their schedule would be expected to win 43-44 games. They won 44. That’s not a team without weakness — it’s an average team.

In the playoffs, they’re beating the Bulls — a slightly better than average team overall this season, but also a team with a major flaw: one of the league’s worst offenses.

Meanwhile, the Indiana Pacers have continued their post-All-Star break swoon and are struggling to keep pace with the sub.500 Atlanta Hawks. The Wizards should be favored against either team in a second round matchup. Which would put Washington into the conference finals against (probably) the Miami Heat.

It’s the 2013-14 NBA Eastern Conference, where being meh is good enough because nearly everyone else is meh-er.

In many ways, the Wizards this season are a fascinating experiment in perception. On one hand, there’s a solidly average regular season and no top-end production. On the other hand, there’s a likely first-round win against the Bulls and a good chance they make a run to the Eastern Conference Finals.

Folks in the “they’re really not that good” camp can point to the historically weak conference and Indiana’s meltdown, which carved out the path. But…it’s not Washington’s fault their opponents suck. The only thing they can do is play their game and beat whoever’s put in front of them. Being average when others are bad might be a functional equivalent of being good.

For me, it’s clear that the Wizards are an average team that’s drawn a flawed opponent in the first round and has a very good chance of getting a flawed opponent in the second round as well. That said, being average this season and next is probably good enough to hang around in the playoffs for the next year or two before Washington’s older players decline and other teams rebuild sufficiently. Washington won’t be a realistic title contender (even if they make the Eastern Conference Finals), but it’ll be fun to see them playing in May.

In other words, have fun, but don’t go overboard revising conclusions drawn from six months and 82 games worth of data over a few weeks against a couple opponents. What would be cause for some revision? Beating the Heat and making it to the Finals.

At any rate, here are a couple looks at the Wizards-Bulls first round series through the first four games. First up, here’s Player Production Average. PPA is an overall evaluation stat I developed. It’s designed to credit players for things they do that help a team win and “debit” them for things that don’t — each in proper proportion. It’s a pace-adjusted, per minute stat that accounts for defense and includes a degree of difficulty factor based on the level of competition a player faces while on the floor. In PPA, 100 = average, higher is better and 45 = replacement level.)

The top two producers have been Taj Gibson and Trevor Ariza. Mike Dunleavy’s high rating is largely a product of a single terrific game in a small sample size. Bradley Beal is having a good series. John Wall and Martell Webster have also been solid.

Folks have gotten excited about Nenê’s play, but the big man hasn’t really played all that well outside of game one.

Want to see why Chicago is struggling? Their only above average performers in these four games have been Gibson and Dunleavy. Noah, Boozer and Butler have been subpar. Augustin and Hinrich have been wretched — especially Hinrich who has given the Bulls 32.0 minutes per game of nothing.

Last, here’s a look at estimated wins added (call them eWins) for the series:

This eWins approach uses total production to estimate each player’s individual share of team wins. It works reasonably well over the full season. For the series, it has the Wizards with a 2.4 to 1.7 eWins lead, which is reflective of a couple very close games (Washington’s overtime win in game two, and Chicago’s narrow game three victory.)