A few years back, I embarked on an effort to develop a statistically-based, objective method of evaluating prospects for the NBA draft. I make no claims that it’s perfect, but I’ve found the results decent enough, albeit not yet subjected to rigorous analysis. That’s coming.

When I get time.

On the Wizards message board at RealGM, I referred to the effort a few times as “Ye Olde Draft Analyzer,” someone called it YODA, and the name stuck. YODA isn’t complex — at least not yet. It’s built on the Player Production Average metric I devised that credits players for things they do to help their teams win, and debits them for things they do that hurt the cause — each in proper proportion. YODA takes each player’s production (box score stats) then applies adjustments for position, age, team strength/level of competition, and objective measures of physical attributes (combine measurements and times).

In general, YODA likes efficient players who shoot well, rebound well, assist without committing turnovers, and generate blocks and steals without fouling too much. Being on a good team that plays a challenging schedule is also helpful, but not determinant — players like Kenneth Faried, Paul Millsap and Danny Granger had excellent ratings despite not playing for traditional powers.

YODA’s biggest limitation is international players. I haven’t had the time to research the numbers posted by prospects overseas, or to objectively assess the quality of the competition they face. Rather than guessing, I’ve chosen to leave them out of the process for now. Given the global nature of the draft, that’s a significant limitation, and it’s one I hope to fix for next year.

My belief on draft strategy is that the smart move is to pick the best player available, even if he doesn’t fit an immediate need. My approach is to first rate players in absolute terms, then group them into tiers of “about the same.” The idea is that when several players of “about the same” quality are available when your team’s pick comes, the team can pick the player they think best fits current needs. But, don’t reach into a lower tier for a perceived need. Just pick the better player and make another move down the road, if necessary.

Here’s this year’s draft in order of both absolute value according to YODA, and divided by tier.

In simple terms, the first round grades end with Tier Six. If things go more or less the way the mock drafts predict, the Wizards may be able to select a PG from Tier Three (Delon Wright), or perhaps a PF with potential like Looney.

While I fully expect the Wizards to sell or give away their second round pick, I think there may be some opportunities to get potentially useful players on inexpensive contracts with additional second rounders. I’d be interested in taking a guy like Cliff Alexander, or even Robert Upshaw (assuming he’s medically cleared to play despite a heart condition).

The consensus view on this year’s draft seems to be that it’s top heavy with a steep drop-off in talent after the lottery. I don’t really see that in the numbers. Towns and Okafor are a relatively weak top two, and the drop in ratings isn’t any greater than it is in most years. In other words, it looks like a draft.

Feel free to tweet me if you have questions about specific players. I’ve analyzed most seniors, and virtually all of the early entrants (except for the international players).

EDITED on June 30 when I was able to confirm that Kelly Oubre’s standing reach, as measured at the scouting combine, was incorrect. When the measurement was corrected, Oubre moved from Tier Four to Tier Three. 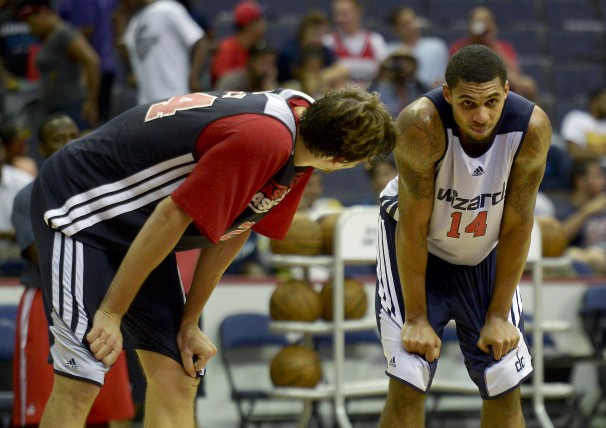 Here’s the challenge in assessing what kind of pro Glen Rice Jr. could become: how to assess his performance in the NBA Development League. When I ran Rice’s college numbers through my stat-driven draft analysis machine (dubbed Ye Olde Draft Analyzer, or YODA for short), I became an instant skeptic of the team giving up two second round picks to get him. But after further analysis, the Wizards may have found a potential contributor.

When the Wizards swapped those picks for Rice, there were two players available that had late first round grades in YODA: Nate Wolters and Zeke Marshall. Wolters was taken the pick after Rice, and ended up in Milwaukee. Marshall went undrafted and ended up signing to play in Poland.

But let’s back up. Why was I skeptical? Answer: Rice’s college performance was unimpressive. As a freshman, he had a second round grade in YODA. As a sophomore and a junior, he landed solidly in “do not draft” territory. Not “don’t draft in the first round,” but rather — don’t draft at all. Rice did improve his rebounding during his college career, but he was inefficient offensively and exhibited sub-par shooting from both the three-point line and the free throw line. The add in the arrest and other “character issues” and it’s not exactly a recipe for future NBA success.

Then he went to the D-League and did an abrupt about face. He converted a high percentage from two-point range, shot well from downtown, and boosted his free throw percentage to about the NBA average. He rebounded well, handed out assists, stole the ball, blocked shots, and trimmed his turnover rate. In short, he grew up and began to produce at the level of his purported talent level.

If he’d produced like that as an NCAA senior (assuming he played a schedule of average difficulty), he’d have rated as a mid-first round pick in YODA — even with a ding for those “character issues.” Of course, that was D-League production, not college. And I haven’t done sufficient research to determine whether the level of competition is comparable.

With the exhibition season starting tonight, we’ll soon get a sense for what Rice will be able to do. Based on what he did in the D-League, it’s safe to say that he at least has the potential to be a useful NBA player. Which would be a good outcome to get from a couple of second round picks.