Here’s the situation: Your team is involved in a close game (margin no farther apart than 5 points either way) in the 4th quarter or overtime. The question: Who do you want shooting the ball for your team?

The popular answer over the past decade has been Kobe Bryant. According to legend (and even polls of general managers), no one is more clutch than Kobe. No player of recent vintage can surpass (or even match) Kobe’s incredible, incomparable, sublime skills as a “closer” of games. Right?

Kobe fans would love the chance to regale us with details of why he’s such a great closer. They’d list great performances and incredible buzzer beaters, and we could all sit around and marvel at the incomparable daring-do.

Or, we could go to the Play Index and Basketball Reference and look up the numbers.

This season, in the 4th quarter and overtime when the scoring margin is 5 points or fewer (in either direction), Bryant leads the league in shot attempts. But, among the 37 players with at least 40 field goal attempts in the 4th quarter or overtime with the game margin within 5 points, Kobe has the has the 4th WORST shooting percentage — .327. Only Kevin Garnett (.325), OJ Mayo (.308) and John Wall (.238) have shot worse this season in clutch situations.

I went back through the records and found 246 individual players who generated 768 player seasons since 2000-01 in which the player averaged at least 1.0 FGA per game in “clutch” situations (4th quarter or OT, margin of the game 5 points or fewer). The averages:

In other words, the greatest closer of the past decade has actually been a below average shooter in clutch situations.

If we slice off everyone with fewer than 900 FGA (to find a group most like Kobe in terms of longevity and volume), Kobe still ends up below average in shooting from the floor.

Make the cut 200 total games in this situation and we get the same story.

The point is not to bash Kobe, but rather to highlight the utility of stats. Fans (and at least some basketball decision makers) “know” what they see. They don’t need stats — those are just for a bunch of geeks.

Except, subtle distinctions are virtually impossible to see. Take two hypothetical players. Both play exactly the same number of minutes for a team. They’re identical players in every way (including attempting 10 field goals). Over 82 games, that’s 820 FGA each. The only difference: One is a 50% shooter, the other a 45% shooter.

Over the course of a season, the difference is 41 made shots — one additional made shot every other game. If you say you can see that difference, you’re lying.

One of the values of stats is to check the claims that slide off the tongue so easily. Did I really see what I thought I saw? Did what others say happened really happen?

We get to find out whether Kobe really is a great clutch shooter, or whether he’s average (or below average) in the clutch. There’s value in that.

The underlying point to the Kobe hagiography is that any story about a basketball player’s successes is incomplete without accounting for the failures as well. When I hear that a player averaged 18 points and 8 rebounds, I don’t have enough information. How often did he shoot? How often did he get to the line? How many assists? How many turnovers? How many offensive rebounds?

At this point, let me pause and say that I think Kobe is a terrific basketball player. He’s one of the better players of his generation, and he’d almost certainly go on my Rushmore of all-time NBA shooting guards. He’s not Jordan, but that’s not much of a criticism — Jordan was outlandishly, preposterously dominant.

But we’re all done a disservice when legend and hyperbole take the place of reality. Kobe’s done enough to be recognized as a great player. His fans don’t need to make stuff up to prop up his legacy. His overall meh clutch shooting needs to be considered, but there are more than enough accomplishments for Kobe to go down as an all-time great.

Like most basketball fans, I’m an admirer of Wilt Chamberlain. He was a dominant figure — no question one of the all-time greats. When I get around to posting my “Rushmore” lists, he’ll make several of them. For those who don’t know, today is the 50th anniversary of the day Wilt scored 100 points in an NBA game — highest individual scoring game ever.

This morning, in inimitable ESPN full-hype style, Mike & Mike celebrated Wilt’s achievement by wondering if it’s the greatest individual performance in sports history. As is normally the case when discussing basketball, the radio conversation was long on cliches and meaningless hype, and short on meaningful analysis. Not a single person mentioned “pace,” for example.

So, I’ve dusted of my era translator and taken a look. What I’ve done is take the top scoring games since the 1985-86 season (which is when Basketball Reference’s box score database begins) and translated those games to Wilt’s phenomenal game.

Here’s a list of the NBA’s top scoring games since 85-86, resorted by translated points to Wilt’s 100-point game. 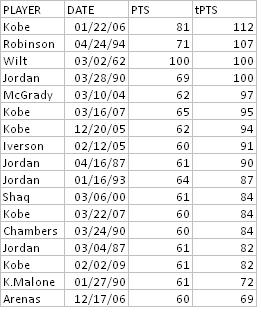 What we see is an illustration of how much the game has changed. NBA teams shoot far less frequently in today’s game than they did in Wilt’s. This simple fact reduces opportunities for players to compile the gargantuan numbers Wilt (and other players of that era) posted.

However, viewed through the lens of a player’s “share” of his team’s production, we see similarities between players today and players of yesteryore. Lebron James is like Oscar Robertson. Maybe Shaq is like Wilt. Maybe Dwight Howard is like Bill Russell. This doesn’t diminish the mythical players that came before — it puts them in a context that’s familiar and gives insight into what we’re seeing today.

So, back to Mike & Mike for a second, Wilt’s 100-point game was a great performance, but arguably not the greatest scoring performance in league history. These translations suggest Kobe’s 81-point night might have been the best ever scoring game, followed by David Robinson’s 71, then a tie between Wilt’s 100 and Jordan’s 69.

Let’s celebrate the 50th anniversary of Wilt’s great game. But let’s keep it in proper context and let’s do it with perspective.