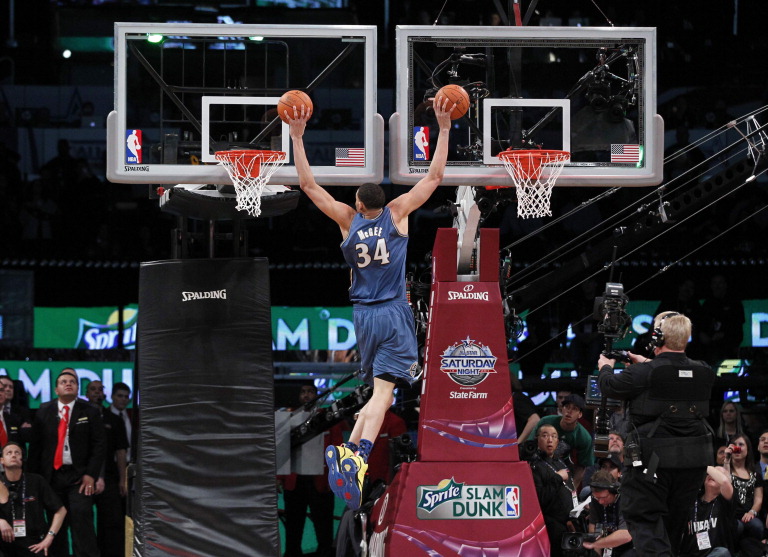 As I wander the vast tundra of the Internet, I keep stumbling across Wizards fans excited about the play of Javale McGee. The general sentiment among the die hard is this: McGee has improved and he’s still young. The action they want: The Wizards need to lock him up now rather than risk seeing him leave in free agency.

I am not here to terminate all talk of a McGee extension. He has otherworldly physical ability, and I’ve seen signs of development when I watch the games. I think he’s getting better.

But, there’s enough evidence to suggest that pumping the brakes on contract talks would be a wise course of action for the Wizards.

While he is doing more offensively, he’s never been less efficient at the offensive end. His offensive rating (points produced per 100 individual possessions) stands at 98 — one of the better marks on the team, but well below the league average (about 102.6). Part of this is turnovers (the highest turnover rate of his career), but the bigger part is awful free throw shooting (45.7% from the line so far this season).

The free throw shooting is cause for concern because both his percentage and his per minute free throw attempts have dropped every season of his career so far.

While his overall percentage from the floor is adequate thus far, the numbers at Hoopdata show that he still hasn’t developed an effective shot at any range beyond point-blank. This season, McGee is shooting 68% at the rim — but from 3 feet or more, just 31.7%. At that conversion rate, there’s no reason for him to take a shot unless he’s at the rim.

So, that’s offense. On the defensive end, folks have been getting excited about the blocked shots. And they are spectacular. The problem: in his zeal to block shots, McGee too often fails to make basic plays that good centers manage routinely. For example, on dribble penetration McGee often crouches in the background and attempts to spring out to get the block. The right play — the one Tim Duncan makes — is to step over quickly and impede the penetrator’s path to the basket. Force a tough shot or a pass and let the blocked shot come as a result of presence and positioning, not just athleticism.

And, the possession-by-possession data compiled by Synergy rates McGee as the team’s WORST man defender — despite all the blocked shots.

When McGee has been on the floor, the on/off data suggests the team has been much worse at both ends of the court.

Are these signs definitive? No, of course not. It’s still early in the season, and I’d expect those on/off numbers to moderate as more games are recorded. Maybe he’s just on a cold streak from the free throw line. Maybe he’ll start “getting it” on defense. Maybe the offensive efficiency and shooting percentage will climb as he continues implementing his still-developing offensive repertoire.

But, maybe he’s a human highlight reel that just won’t make enough of the “routine” plays to anchor a winning team. Maybe he’s the definition of “empty stats” — a guy who posts some gaudy numbers that get attention, but always for a loser.

My point here is not to say McGee will or won’t “get it”. My point is that there’s evidence to suggest he hasn’t “gotten it” yet. So, there’s no reason to rush into a contract extension with him. The Wizards have plenty of cap and roster space, plus the right to match any contract offer he receives. The smart move is to wait, watch and evaluate. There’s little to gain — and potentially much to lose — by making a decision now.

2 thoughts on “Pumping the Brakes On Javale McGee”