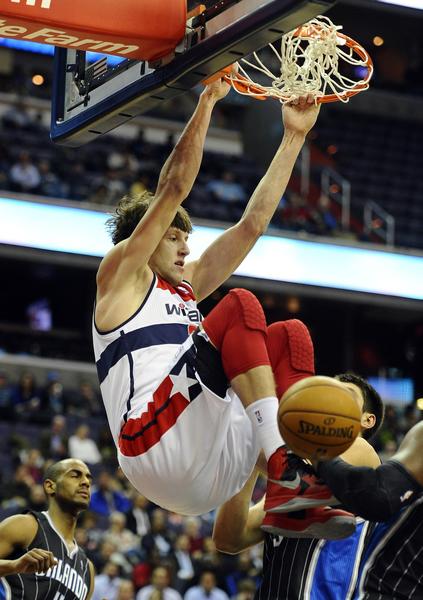 Like many fans, I’ve been encouraged by watching the performance of Jan Vesely since he’s entered the team’s rotation. He’s long and agile, and it’s felt like his offensive game hasn’t hurt much because only one of his 14 shot attempts this season has come from outside of eight feet.

But, the scoreboard is actually telling a different story — at least so far. In the four games where Vesely has had significant playing time, the Wizards have been outscored in each during his minutes on the floor (the team was +3 in his one minute against Dallas). For the season, Vesely is averaging 17.4 minutes per game, and during those minutes the Wizards have been outscored by 42 points. That’s 23.2 points per 48 minutes.

When Vesely has been in the game, the Wizards basically held their own in two of the games (against Minnesota and the first Cleveland matchup), and they’ve been stomped twice. The San Antonio game we can maybe dismiss because it’s the Spurs, and because the game was played in San Antonio, and because it was Vesely’s first game back in the rotation. And there’s no way I’d take any plus/minus stat as definitive after just five games and 87 total minutes.

But, this is something that bears monitoring. Given Vesely’s profoundly limited offensive repertoire, his contributions must be of the rebounding, defense, intangibles variety. If these contributions result in the team getting stomped while he’s in the game, there’s no value to them and the Wizards must find another solution to their frontcourt depth woes.

Hopefully, the scarily bad on/off numbers are the result of a couple small sample flukes. It would be much better for the Wizards (and for Vesely’s hopes of remaining in the NBA beyond this season) if he can be the backup PF/C they desperately need.