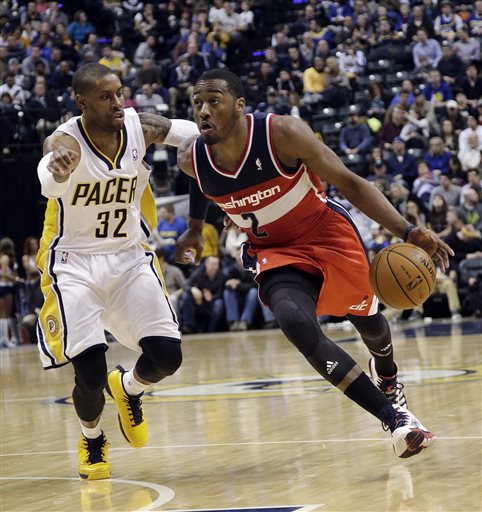 Folks have been practically tripping over to anoint John Wall a Genuine SuperStar and Franchise Savior since…well…before he even signed a contract. The Wizards literally gave him red carpet treatment when he arrived in DC after being made the number one selection. Since then, he’s been proclaimed as a star, as one of the game’s elite, and was awarded a max contract basically as soon as the Wizards could offer it.

This blog post should not be read as “hate” for Wall. He has improved significantly since his first two seasons, and he has become good. He continues to possess elite (true star) potential, but despite the array of assertions that he already is a star…he’s not. Yet.

Before I go any further, it’s probably worthwhile for me to articulate what I mean by “star.” For me, it’s not a synonym for “well known” or “popular.” They’re guys consistently do the things that cause their teams to win games. Through the years, there have always been “media” stars — guys whose reputations exceed their actual production. Usually, they have high per game scoring averages — think Dominique Wilkins, Allen Iverson and (in recent years) Carmelo Anthony (although Anthony’s production has moved somewhat closer to his rep this season).

At 23 years old, Wall is decidedly NOT in that category. He’s a very good player now, and he’s on the cusp of greatness — if he continues to improve his jumper and cut down on turnovers. He could be one of the game’s elite in the very near future. He’s just not quite there yet.

Here are a few illustrations through the prism of the metric I developed, Player Production Average (PPA). PPA credits players for things that contribute to winning and debits them for things that don’t — each in proper proportion. PPA is pace adjusted, accounts for defense and includes a degree of difficulty factor. In PPA, 100 = average, higher is better and 45 = replacement level. PPA is a per minute stat.

First, let’s look strictly at point guards. In most seasons, it takes a PPA of 225 or higher to be an MVP candidate. Players scoring above 200 are among the game’s truly elite players. Here are this season’s top 10 PGs (minimum 500 minutes):

If I redo the analysis looking at totals instead of per minute production (to reward durability), Wall moves to fifth behind Curry, Lowry, Paul and Dragic.

Based on my analysis of Wall’s game and what I know of his work ethic and personality, I’d take his future over the future of anyone on the list ahead of him except Paul. But he needs to become more productive to become a truly elite PG.

Comparing Wall to the rest of the league, it’s hard to support the claim that he’s a “true star” (elite player). He’s top 20 in total production, in part because of he plays lots of minutes. In per minute production, he ranks just outside the top 40.

As I discussed a few weeks back, Wall’s positive contributions are plentiful — not unlike some of the game’s best players. But, his negative plays (poor shot selection, missed shots, and turnovers) are also abundant. I estimate that his shooting from the floor has cost the team 59 points so far this season — just under a point per game. That doesn’t sound like much, but over the course of 60 games it works out to about two more wins. Just two more wins at this point would have the Wizards tied with Chicago for the fourth seed, and just a half game behind Toronto for third.

To this week’s PPA update:

Ariza and Wall continue to lead the way for the Wizards. Ariza is having a career-best season in his contract year. I have to think the Wizards would like to re-sign him, and I suspect Ariza’s more modest career production may keep his price more manageable.

Martell Webster’s PPA declined by one point — down for an eighth consecutive update. It’s good the team is giving him some days off to rest his ailing back, which is the likely cause for his production dip.

The new and returning old guys (Andre Miller, Drew Gooden and Al Harrington) were all awful since the last update.

It was good to see Otto Porter make some plays in the loss to Memphis. He’s back out of negative PPA territory, unlike number one overall pick Anthony Bennett whose PPA is -3.

A couple more entries in Small Sample Size theater: the departed Wizards. Jan Vesely’s PPA in Washington: 69. In 59 minutes for Denver: 58. PG Eric Maynor in Washington: 8. In 68 minutes for Philly: 48. That 48 was right around Maynor’s career average before signing with the Wizards. I still have no idea why the Washington front office thought he’d be good. Thankfully, he can now do a job for which he’s perfectly suited — helping Philadelphia lose games.